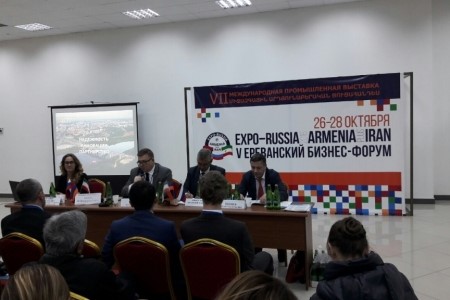 Taking into account the fact that the development of economic relations between the Russian Federation and the Republic of Armenia is due to historically developed close and multilateral production and scientific and technical ties and joint strategic interests, on October 26-28, 2016, the business mission of small and medium-sized businesses of the Kaluga region took place to Republic of Armenia, Yerevan, with participation in the 7th International Industrial Exhibition "EXPO RUSSIA ARMENIA + IRAN".

The exhibition is organized under the patronage of the Chamber of Commerce of the Russian Federation and the heads of chambers of commerce and industry of the CIS countries. The main purpose of the event is the development of economic, scientific, technical, cultural and political cooperation between the Russian Federation and the Republic of Armenia, the establishment and strengthening of ties between the countries, the development of joint business, trade, economic and investment relations.

According to the feedbacks of the Russian and Armenian participants, the EXPO-RUSSIA ARMENIA exhibition, held seven times in Yerevan, achieved its goal and served to comprehensively strengthen the ties between the two countries. Evidence of such a high level of relations is the annual participation in the opening ceremony of the event of President Serzh Sargsyan.

On October 26, after the grand opening of the exhibition, enterprises took part in the 5th Yerevan Business Forum on the theme: “Prospects for expanding economic and innovative cooperation between Russia and Armenia due to Armenia’s joining the EEU” at which the Trade Representative of the Russian Federation in the Republic of Armenia, Babko Andrei, Director for International Cooperation of OJSC “Zarubezh Expo” and General Director of the Group of Companies “RusIranExpo” Alexander Sharov made a welcoming speech.

Within his report, Andrey Babko spoke about the main forms and system of support for Russian small and medium-sized businesses from the Trade Mission, as well as possible prospects for entering the Armenian market.

Evgenia Pantyukhina spoke at the forum with a presentation of the industrial potential of the Kaluga Region and spoke about the activities of exhibitors of the collective stand of the region.

Alexander Sharov told in his speech about the features of doing business in Iran: export, import, engineering, finance, logistics, marketing. Participants learned about the realities of post-sanctioned Iran:
what has changed, and how it can be used, about the features of financial settlements with Iranian partners, the system of logistics of export-import to / from Iran.
The forum was attended by more than 20 Armenian companies and media representatives. Following the results of the forum, bilateral meetings of the participants were held, during which they presented their proposals and discussed further areas of cooperation.

Tatyana Smirnova, Head of the Directorate for Combating Economic Crimes of the Ministry of Internal Affairs of Russia, at the round table "Problems of development of the financial and banking system of Russia and the CIS" noted the need to expand cooperation between the CIS countries and a number of existing tax issues.

During 3 days of the exhibition, the enterprises - participants of the business mission of the Kaluga region held a significant number of business negotiations, as a result of which agreements and intentions for further cooperation with Armenian companies were reached.

The operator of the organization and conduct of the business mission was the Business Cooperation Center “BGgroupp”, headed by General Director Maria Vechkanova.