BGGroupp.ru » en » Reports » Report on the acceptance of delegation from the Qinghai province , China

Report on the acceptance of delegation from the Qinghai province , China 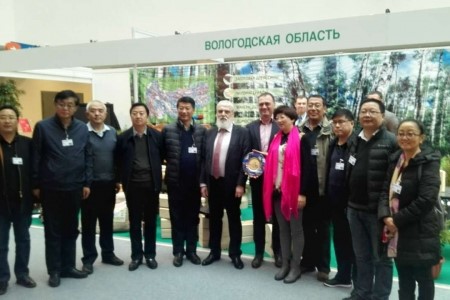 Relations between China and Russia are developing in various directions, including in the field of forestry. In the period from October 18 to October 26, 2016, a delegation from China's Qinghai province on forestry visited a few organizations in Moscow to familiarize themselves with the Russian realities of forest management, legislative regulation, and to strengthen cooperation and exchange of experience.

On October 18, the delegation met with representatives of the Moscow State Forest University.
An excursion around the University was organized, during which faculty members spoke about scientific and practical achievements in the field of forestry in Russia. October 19 The delegation visited the All-Russian Institute for Advanced Studies of Senior Managers and Forestry Specialists. The Institute is a methodical center in the field of additional and secondary vocational forest education. Scientific research institute in the field of economics, state and economic management of forests, forest legislation has been recognized not only in Russia but also abroad. The most significant are the development of principles of national forest policy and systems of state forest management.

On October 20, a meeting was held with representatives of the Center for Ecology and Forest Productivity of the Russian Academy of Sciences. The leading researcher of the Center, Yuri Gagarin, told colleagues about the activities of the Center and the current features of forest management in Russia.
Also, on this day, the Chinese side met with employees of the Department of Environmental and Natural Resources Law of the Moscow State Law University named after O.E. Kutafina. During the meeting, the legislative aspects of forest management and the main regulatory and legal
documents regulating activities in this area were discussed.

On October 21, representatives of the Law Faculty of Moscow State University, namely, teachers of the Department of Environmental and Land Law, in cooperation with the head of the Scientific and Educational Center "Legal Regulation of Entrepreneurial Activities", spoke about legislative activities in the field of forestry and the practice of applying regulations in the Russian Federation.

October 24 A delegation from China took part in the Round Table “Investment Climate in Russia (Existing base of legal regulation of forest complex activities and proposals for its improvement)” at the 8th International “Forest and Man” Forum on the territory of the “Expocentre” Fairgrounds.
On October 25, the vice-presidents of the Union of Timber Manufacturers and Exporters of Russia Frolov A., Irtuganov T. told the Delegation members about the activities of the Union, the directions of development of forestry in Russia, about the experience of international cooperation
in the field of forestry.

The outcome of all the meetings of the Delegation with representatives of various organizations was mutual understanding on all relevant issues that were raised at most of the meetings, as well as the identification of possible ways of cooperation between Russia and China in this area.