BGGroupp.ru » en » Reports » The business mission of the Omsk region enterprises to the Finland republic, Helsinki.

The business mission of the Omsk region enterprises to the Finland republic, Helsinki. 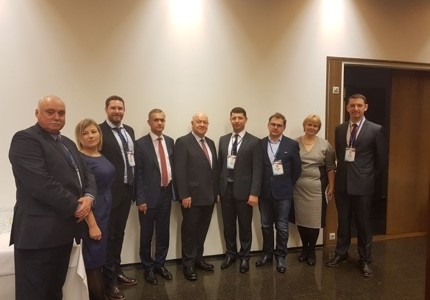 On November 7, after the delegation arrived in Finland, an introductory stage of the business mission took place: a sightseeing tour of Helsinki was organized for the participants, during which they learned a lot of interesting information about this city and about Finland in general, plunged into the history and traditions of the Finns, visited the main attractions.

On November 8, a few business meetings of business mission participants took place.
Representatives of the companies “FC Biomedservice”, “IPR-Farm” and “Yagodi Sibiri” visited the Finnish company Leader Oy, the world's second largest producer of healthy food, namelyprotein bars, sports nutrition, nutritional supplements, vegetarian products, etc. At the meeting, the companies discussed the possibility of supplying the products of Omsk companies as ingredients for the Leader product range and co-production in Finland, as well as the inclusion of biologically active additives produced by “IPR-Farm” and “FC Biomedservice”. Agreements were reached on the continuation of contacting, including the exchange of technical and other documentation. The Berries of Siberia Company has agreed to supply fresh and frozen berries and fruits to Finland to produce nutritional bars under the Leader brand. From Leader, the meeting was attended by Managing Director Janne Hakkala and Export Coordinator Laura Lindel.

At the same time, Vladimir Tikhovskoy, director of the company SMP-52, took part in a meeting with the company Stara, which was represented by the chief engineer Tuomas Lautaniemi, and the Helsinki Department of Road Facilities, which was represented by the head of the department
of road facilities Kaisa Komulainen. The Russian side received a proposal on the possibility of selling anti-icing materials BIONORD, chemical and other Russian-made products to Finland.

The Finnish side has expressed interest in these products, as a result, an agreement was reached on the delivery of the first batch of anti-icing materials to Finland to test products directly in local climatic conditions.

In the afternoon, the companies LLC “FC Biomedservice”, “IPR-FarmI and LLC “Yagodi Sibiri” met Leevi Lassila, the director of the Finnish company Foodandhealthtech. Russian manufacturers of dietary supplements reached an agreement on adjusting the need of the Finnish side for medical products and dietary supplements, with the study of possible exports to China in the interests of the Finnish side through Kazakhstan. In turn, options will be considered for the supply of frozen berries of "Yagodi Sibiri" to the Finnish market, where the company Foodandhealthtech will act as a distributor. The parties agreed to discuss the terms of delivery soon.

At this meeting, detailed information was obtained about the features and specifics of the work of this association. In addition, Olga Dotsenko had the opportunity to present her company, show samples of its products and agree on the continuation of contacts in the future.
On the same day, Olga Dotsenko visited the Wood City multistory housing construction objects in the suburbs of Helsinki, after which a meeting was held at the Finnish Forest IndustryAssociation. During the meeting, Olga presented the company's products and reached an agreement to continue contacts to discuss future joint projects. On November 8, she visited the largest Koskisen Group enterprise in the Finnish forest and woodworking industry. During the visit, there was an excursion to the woodworking plant of the company, after which a meeting with representatives of the management was held. During the meeting, the company “Bolshoi Dom Drevesini” presented product samples and reached an agreement to continue contacts in the future, to study the details of possible joint projects.

Within the framework of this event, the company “SMP-52” represented by the director Tikhovsky Vladimir held talks with the following companies: Eurofacts Oy, Wille Oy, LebedevConsulting Oy and Gis Consulting Oy. An agreement with all the companies was reached to continue contacts. Eurofacts Oy and Wille Oy have expressed interest in purchasing anti-ice coatings, chemical and other products of Russian origin.

“FC Biomedservice” and LLC “IPR-Farm” have negotiated with the following Finnish companies: Finnish International Business Holding, Eurofacts Oy, El-Logos Oy and Lebedev Consulting Oy. With these companies, options for possible cooperation were discussed in terms of Russian companies entering the Finnish market and distribution of dietary supplements, as well as assistance in obtaining the necessary permits for these projects.

The company “Bolshoi Dom Drevesini” negotiated with the following representatives of Finnish companies: Finnish International Business Holding Oy, El-Logos Oy, as well as with a representative of the Finnish Association of Forest Industry and Forestry Indufor. A presentation of the products was made, an agreement was reached to continue contacts for discussion joint projects.

Also, following the negotiations of representatives of the “Bolshoi Dom Drevesini” and the Samara company “Zhivoy Dom”, an agreement was reached on the shipment of impregnation for the tree “Patchwork wax” in the amount of 50 liters.

“Already this week we will ship the impregnation for wood “Patchwork wax for the company “Zhivoy Dom” with a volume of 68 liters. We have signed a contract and plan to cooperate successfully. Also, in the Trade Representation of the Russian Federation in the Republic of Finland, we left samples of our products and commercial offers that should be distributed to Finnish entrepreneurs interested in woodworking and eco-friendly wood products. In addition, our company is very interested in the plant SVT, which is the leader of the Finnish iron (kiln) casting market. We are interested in establishing direct supplies of products from the SVT factory”, - Olga Dotsenko told.

LLC “Yagodi Sibiri” represented by Commercial Director Alexander Nikitin, conducted negotiations with the following companies: Agrotechnology from Finland Oy, El logos Oy, JPT industria Oy and Farmex Oy. A presentation of advertising booklets and product samples took place, an agreement was reached to conduct a remote discussion of joint projects and the possibility of personal contacts after working through all the details.

On November 10, the business program of the companies “FC Biomedservice”, “IPR-Farm” and “Yagodi Sibiri” started with a visit to ELMA 2017, the largest agricultural exhibition in Finland, which presented Finnish companies operating in the food, agricultural and other industries. In addition to Finnish companies, as exhibitors, there were companies from some countries of the European Union, as well as several companies from the Russian Federation. The company “SMP-52” met with Kemira Oy, which was represented by Merja Niskanen, head of the department for relations with Russia and the CIS. At the meeting, mutual interest was expressed in the products of both the Russian and Finnish sides, an agreement was reached to continue contacts in order to discuss the details of future projects and first deliveries. After meeting with Kemira Oy, Vladimir Tikhovskoy also visited ELMA 2017.

At the same time, a meeting was held between the “Bolshoi Dom Drevesini” and Sepon Valutuote Oy represented by Edward Savolainen, the head of the department for relations with Russia. An agreement was reached on cooperation, at the end of the business mission the parties
will continue negotiations on pricing and the first dates for the delivery of products from Finland to the Russian Federation.

After visiting the exhibition of the company LLC “FC Biomedservice” and “IPR-Farm”, they visited the Finnish company Hankintatukku Oy, where they held talks with the managing director of the company, Arno Latvus. Hankintatukku is the largest pharmaceutical company in Finland. Mr. Arno expressed a special interest in the products of the company "IPR-Farm", which in addition to biologically active food additives, produces frozen blood of wild deer, rich in nutrients and enzymes. The CEO of the company, Manyak Valentin, spoke in detail about the production technology and the volume of raw materials produced. The parties agreed to remotely discuss the possibility of initial deliveries of this type of product to Finland, followed by a long-term contract.

The business program of the business mission of enterprises of the Omsk region of the Russian Federation to Finland ended with a general visit to the largest Finnish company S Group, which is the most common national trading network in Finland, with an annual turnover of 11 billion
euros. S Group was represented by Kim Strömsholm, vice president of the company, and Anne Heikkila, head of the supply company S Group. All companies from the Russian side had the opportunity to characterize the specifics of their activities and present products. As a result of the
meeting, an agreement was reached to continue contacts in order to work out the details of concluding long-term contracts for the supply of Russian goods and their distribution in the S Group network.

The operator of the organization and conduct of the business mission was the Business Cooperation Center "BGgroupp" (www.bggroupp.ru), headed by the General Director Vechkanova Maria.